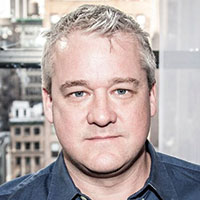 Hunt and Believe have partnered with top talent and distributors to produce a range of premium content including: Dear Basketball, the Oscar and Emmy-winning animated short film with Kobe Bryant, scored by the iconic John Williams and animated by Disney legend, Glen Keane; The LeBrons with NBA champion, LeBron James; and In the Booth with DJ/producer Tiësto. Current projects include The Owners Box, a new sports documentary series in partnership with Michael Strahan and SMAC Entertainment, Homemade Live, a live cooking series on Facebook Live and Instagram Live with Ayesha Curry, and Between Me and My Mind, a feature-length documentary on Trey Anastasio (lead singer of Phish) in partnership with Stickfigure, premiering at the 2019 Tribeca Film Festival.

Hunt was previously Head of Creative Development for Yahoo’s Original Programming, where he and his team launched over 25 original programs, including Emmy-nominated Burning Love (produced by Ben Stiller) and Ghost Ghirls (produced by Jack Black) as well as shows from Ed Helms (Tiny Commando), Cheryl Hines and Rachel Harris (We Need Help), and John Stamos (Losing It With John Stamos). He developed and executed Yahoo’s largest single launch of original programming in 2013 and was responsible for the company’s first deficit-funded slate of original programming.

Hunt lives in New York with his wife, Olivia, and their two “spirited” boys, James and Waylon.